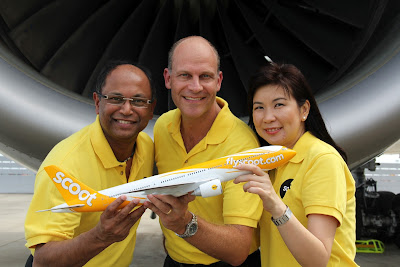 So what is Scoot all about?
Founded on 1 Nov 2011, Scoot is a low cost carrier flying medium to long haul routes established by the Singapore Airlines group. As a budget carrier, it offers cheap airfares that are between 30 to 40% lower than traditional long haul airlines.

Starting in mid-2012 with a fleet of four B777-200 aircraft purchased from parent company, Singapore Airlines (SIA), Scoot is managed and run independently from SIA, and operates from separate offices. Its maiden flights will commence with flights to and from Singapore to Sydney and Gold Coast in June, Tian Jin (China) in August, with 2 other Chinese cities in the pipeline.

Exemplified by the term “Scootitude”, Scoot’s brand personality is a polar opposite to that of its parent company SIA. Unlike the latter, Scoot is about being cheeky, fun and cool, while not compromising on important qualities like safety, reliability and efficiency.  According to CEO Campbell Wilson, Scoot “conveys spontaneity, movement, informality and a touch of quirkiness…”.

These qualities can be seen in the diagram below: 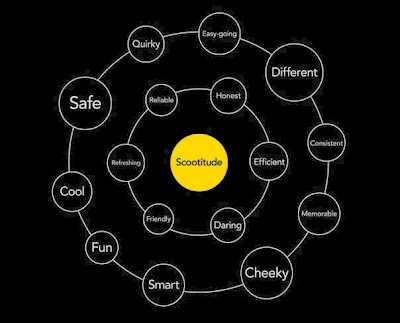 Targeting youths and young adults, budget travellers and the “young at heart”, Scoot’s value proposition is to bring you to your destination affordably without the frills but with all the safety and assurance backed-up by the world’s leading airline.  The airline’s brand values are probably best personified by this rather entertainingly choreographed media event held not too long ago:

Adorning bright yellow as its corporate colours, Scoot’s emphasis on casual spontaneity (as opposed to Singapore Airline’s oriental mystique and exclusive glamour) is seen in how its cabin crew uniforms are developed as seen below. 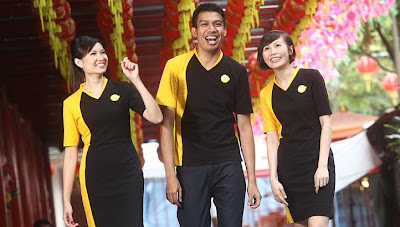 Embracing an irreverent and mischevious flair that is somewhat unusual for home-grown tourism brands, the fledgling airline adopts a rather radical advertising strategy with its WTF (Watch the Fare) campaign. Yes, the acronyms do catch one’s attention! The airline also uses the two Os in SCOOT as the hallmark of its advertisements as seen below: 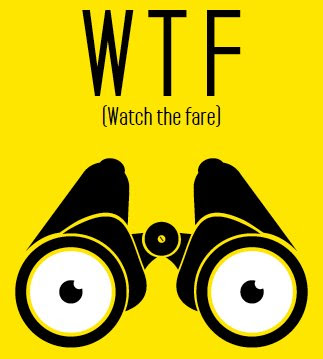 Like any other airline, Scoot relies heavily on its online presence to generate brand affinity, awareness, and sales. Other than having a well-appointed website as you can see below, Scoot’s digital influence is further boosted by its social media properties such as a corporate blog, Facebook Page, and YouTube channel. I am impressed by the fact that they have a dedicated member of the team (Haresh) whose job is to create content for these social platforms. 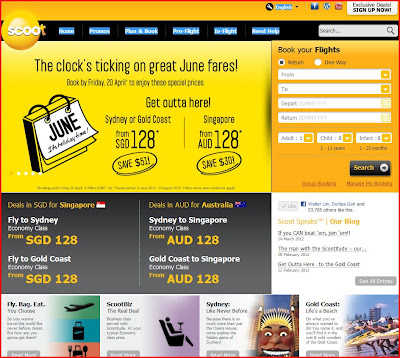 With an informal, home-brewed approach to content creation, Scoot’s Youtube videos are raw and unpolished yet imbued with a sense of humour. An example is the video of the winner of its slogan contest (Lenca Yew) with her proposed slogan of “Get Outta Here” as shown below (incidentally we got to meet Lenca at the blogger’s gathering together with Suhaimi, the other winner of the Scoot contest):

Campbell tells me that they’re still considering setting up a Twitter account. I encouraged them to do so, citing that Twitter would be a good way to manage customer relations, especially amongst Gen “Y”s and Pre-Millenials who may be more comfortable typing/texting than calling or writing long emails.

What struck me most about Scoot was the camaraderie and esprit de corps shown by its team members. As we boarded the cabin on the Singapore Flyer, Scoot crew members worked together to play a rather hilarious game of “Win, Lose or Draw” divided into male and female teams.

Joking amongst themselves while interacting with us in an uninhibited fashion, their collective and individual behaviours exemplified the brand values of the low cost carrier. They certainly made us bloggers feel very much at home with their casual and unassuming air. As we sat down to a dinner of delectable hawker delights on an overflowing table, various members of the team sat with groups of bloggers and chatted about what they do. With an openness and transparency rare in this day and age, Scoot team members shared what they do and regaled us with some of their “war” stories as veterans in the airline business.

I was especially enthralled by Captain Yap Meng Kum’s (Deputy Chief Pilot, Fleet) chronicling of his flying misadventures and how an eagle literally landed on his pilot colleague’s lap after crashing through the aeroplane’s window! What I especially liked about the team from Scoot was their openness to new ideas. By embracing social media and crowdsourcing marketing ideas, Scoot revealed itself to be an unconventional airline that listens more than it preaches.

With an approach like that, I guess the sky’s the limit for this new airline and I look forward to flying on board its planes soon. View of Marina Bay from the Singapore Flyer

To enjoy irresistible promotional fares from as low as SGD$158 (one-way) from Singapore to Sydney, log on to Scoot’s website now! Hurry, while tickets are still available!

Founder of Cooler Insights, I am a geek marketer with almost 24 years of senior management experience in marketing, public relations and strategic planning. Since becoming an entrepreneur 5 years ago, my team and I have helped 58 companies and over 2,200 trainees in digital marketing, focusing on content, social media and brand storytelling.
Leadership Lessons from the Sinking of the Titanic
Stop Human Trafficking with MTV EXIT