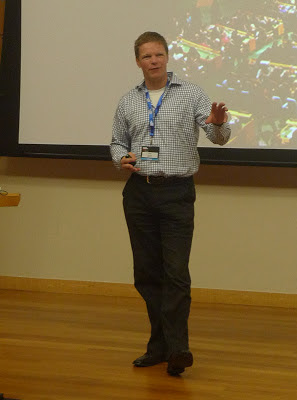 If you’ve followed the news, you would know that Singapore start up Pirate3D (a 3D printer maker) raised a staggering $366,763 from crowd funding platform Kickstarter just 24 hours after being listed! With almost 2,000 backers, the firm has already raised close to $770,000 in total which is way above its $100,000 target.
Speaking at the inaugural Crowdsourcing Week here in Singapore, Sean shared that crowdsourcing is growing at an exponential rate of 88% over the last 8 years. Although it only yields 7 million results on Google compared to Social Media’s 4.2 billion results, the phenomena is affecting every aspect of society.

According to Sean, crowdsourcing is predicated on four factors:

1) Purpose – where should crowd input or contribution come in?

2) Passion – how should one shepherd the interests and emotions of the crowd?

3) Merit – the transparency and openness of crowdsourced markets means that only the best few would win.

4) $$$ – according to Massolution, the crowdsourcing market is almost half a billion US dollars in 2011.

Consider the top 10 tech-affected industries of the near future shown below. 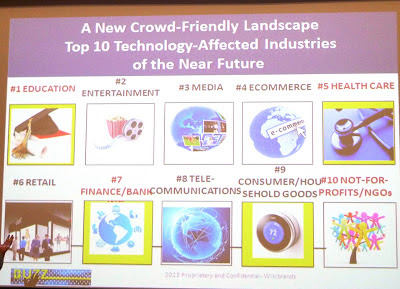 In Sean’s eyes, many of these industries are shifting towards the crowd-sourced model, particularly education, healthcare, finance and non profits. Some examples include the following:

1) eduTecher – an online crowdsourced education portal that allows one to explore and learn, share content and contribute comments and perspectives;

2) Kickstarter – probably the best known (and sexiest) kid in the crowd funding business fueling creative and artistic endeavours. Since its launch in 2009, more than 4.2 million people have pledged over US$649 million, funding more than 42,000 creative projects.

3) Do Not Touch – an errr…. crowdsourced music video that is pretty fun to play with. Try it!

4) Main Street Matters – a crowdsourced project by Benjamin Moore Paints allowing citizens to repaint 20 main streets across the U.S. and Canada with the help of local Benjamin Moore retailers and painting contractors.

5) Threadless – a crowd design and crowd commerce platform for originally designed T-shirts and other products with more than 2.5 million global community members yielding close to 280,000 designs. 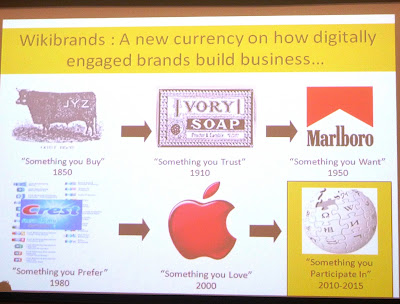 Inspired by Don Tapscott‘s seminal work Wikinomics, Sean’s presentation painted an exciting future where everything can be democratised should the right tools and levers be deployed. The ubiquity of social technologies accelerates this paradigm shift.

In my view, crowdsourcing is still at its relative infancy, especially here in Asia. While crowd activism has certainly grown by leaps and bounds, crowd commerce is still trickling along. I believe this is so because of several things:

1) Asian business is usually built on relationships amongst closed networks. While governments have “open sourced” for years, commercial companies prefer dealing with those they have trusted over the years.

2) Most design and creative companies here do not subscribe to the idea of openly competing for jobs. While crowdsourcing could help level the playing field, it also raises the cost of business and results in lots of “wasted labour” when one’s pitch isn’t selected.

3) The freelance market or “grey economy” is still under-developed here. Most people still view work as a place to go to rather than the activity they undertake. However, this phenomena may change as more people seek a change in their lifestyles.

Having said that, I believe that there is a lot of potential for this to take off here, especially with the parallel growth of SoLoMo. Customers desire greater freedom of choices, empowered by their omnipotent and ubiquitous smartphones. Against this avalanche, companies may have no choice but to cater to the “wisdom” and “wants” of crowds.

What are your views on crowdsourcing? Do you feel that it will supplant the traditional modes of commerce?

Founder of Cooler Insights, I am a geek marketer with almost 24 years of senior management experience in marketing, public relations and strategic planning. Since becoming an entrepreneur 5 years ago, my team and I have helped 58 companies and over 2,200 trainees in digital marketing, focusing on content, social media and brand storytelling.
The Six Cs of Effective Internal Communication
Social Marketology: Book Review