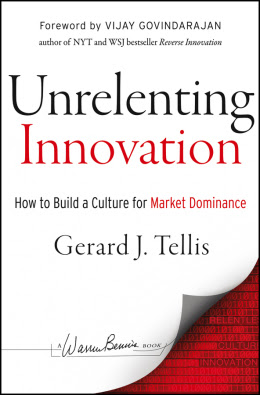 What is the secret sauce to enduring corporate innovation?

Is it the ability to introduce disruptive technologies? Are smaller companies – also known as emergents – more able to shake the market? What about religion, climate, geography, education, patents or even (gasp) luck?

The answer, according to Gerard J. Tellis’ Unrelenting Innovation, is none of the above. Citing numerous studies across hundreds of industries spanning decades, Tellis demonstrates that the most important ingredient for innovation is a company’s culture.

How does one build a strong and innovative culture? Here, the book proposes that innovative firms normally exhibit three distinct traits of innovation:

1) A willingness to cannibalise their existing products. Suffering from the “incumbent’s curse”, most established firms resist killing their cash cows for various economic and organisational factors. Unfortunately, almost nothing lasts forever, especially against the relentless march of technology. While Gillette was willing to make obsolete earlier versions of its shavers, Kodak’s reluctance to kill film cameras ultimately caused its sad demise.

2) A corporate environment which embraces risk. Again, incumbents view risk differently from start-ups as they have less to gain relative to the latter, have higher expectations, and may suffer from the “hot stove” effect (once bitten, twice shy). On the other hand, successful companies from Toyota to Federal Express took great risks. In the words of Mark Zuckerberg of Facebook, “the biggest risk you can take is to take no risk.”

3) An ability to focus on the future. With multiple biases favouring present successes, incumbents are normally less excited about future uncertain markets. To steer their vision to future mass markets, companies should develop models to predict takeoff of radically new products, the evolution of technology (mostly stepwise in growth pattern), and analyse emergent customers.

For companies that haven’t quite reached the holy grail of innovative culture, Tellis suggests that they could embrace business practices that can help engender those traits. These practices are namely:

2) Fostering internal markets. By creating internal competition, innovative companies can bring in the discipline of the marketplace to their firms. However, they need to ensure that these do not result in cutthroat competition amongst colleagues, create cascades and bubbles, or distract companies from their core businesses. Mechanisms range from idea fairs, research and commercialisation contests, to setting up competing divisions, autonomous units and divestments.

3) Appointing innovation champions. Naturally, some companies are led by innovators like Apple’s Steve Jobs and Tata’s (India’s largest conglomerate) Ratan Tata. However, innovation needs to be championed at all levels, and organisations should be structured to provide adequate responsibilities, goals, talents, resources, incentives and competitions to motivate and empower innovation champions.

As always, corporate tales of triumph resonate most heavily with me. Here, Tellis does a masterful job in regaling how stalwarts like Apple, Google, Gillette and Federal Express were able to steer their firms towards success, while incumbents like IBM were able to pull themselves out of the abyss through changing their culture.

In the case of Facebook, Zuckerberg’s refusal to sell his company for millions and later billions of dollars was a strong testimony to his appetite for risk. By contrast, GM’s refusal to cannibalise their existing products or create internal markets led to their failure to embrace the rise of electric and hybrid vehicles. Meanwhile, we’re reminded how 3M’s Post It Pad and Google’s Gmail were created during employees’ 15% and 20% “innovation” time – testimony to the necessity of creating incentives for enterprise.

Comprehensive in coverage, Unrelenting Innovation breaks the mold of today’s business book which tend to focus on fancy models or elegant solutions. In all honesty, its core thesis that culture is the bread and butter of innovation isn’t anything truly new or original. However, it is gratifying to know how this mainstay of innovation is still true, backed by years of painstaking research from the author and his colleagues.

Founder of Cooler Insights, I am a geek marketer with almost 24 years of senior management experience in marketing, public relations and strategic planning. Since becoming an entrepreneur 5 years ago, my team and I have helped 58 companies and over 2,200 trainees in digital marketing, focusing on content, social media and brand storytelling.
Indulge Your Senses with LUPICIA Teas
Creativity and Innovation from the Crowd