The Push of Psychological Sways 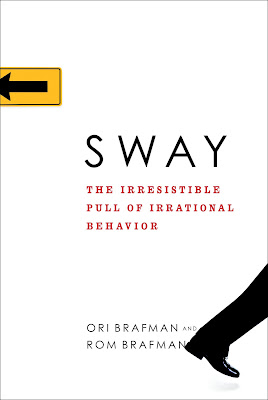 Written in a style reminiscent of Malcolm Gladwell, “Sway – The Irresistible Pull of Irrational Behaviour” by Ori and Rom Brafman explores how seemingly irrelevant psychological influences impact human decisions. Peppered with anecdotes and experiments from social psychology, behavioural economics and organisational behaviour, Sway tells us why much of our decision making is more often subjective than objective.

Citing fascinating examples from the Israeli Army, US’s Supreme Court, Who Wants To Be a Millionaire, and the anthropological fraud known as the “Piltdown Man“, the Brafman brothers’ weave a compelling narrative in the slim volume. Backed by scientific research, the case studies help to illustrate various psychological phenomena throughout the book. They include:

1) The Diagnosis Bias – our inability to reevaluate our initial diagnosis of a person or situation despite changing circumstances. Think about how labels have stuck with people, often unfairly, despite the significant changes they have made at work or in life. A good example of this are job interviews, where often a large proportion of the questions asked have nothing to do with the candidate’s actual performance on the job.

2) Loss Aversion – our tendency to go to great lengths to avoid perceived losses despite how small they are. The tragic story of Captain Jacob Van Zanten and the ill-fated KLM Flight 4805 of the Tenerife Airport Disaster is an example of how trying to shave off a couple of hours in flight delays resulted in a catastrophe.

3) The Chameleon Effect – our tendency to take on characteristics that were assigned to us, often arbitrarily. A startling example was how folks who constantly expressed negative and external stereotypical feelings of old age actually physically aged faster. In other words, if we’re told that we’re stupid when we’re young and we believe what we’re told, it may become a negative self-fulfilling prophecy.

4) The Swamp of Commitment – how we often stick to a decision made and refrain from veering from the course despite changing external circumstances. Combined with loss aversion, commitment becomes a powerful force that seems irretractable. The dynamics of auctions, and America’s dogged determination to stick to both the Vietnam and Iraq Wars, are prime examples of this.

5) The Influence of Incentives – how compensating people for tasks can actually backfire when the pleasure centres of the brain are triggered and overrides the altruistic component. This is why the act of sponsorship and donation is often more successful when approached from a charitable (help save more lives) as opposed to a commercial (gain greater publicity mileage) angle.

6) Dissenters and their Roles – how “black hats” and devil’s advocates help to make the process of justice and decision making more equitable and fair. Challenging the norm can be beneficial for one to escape from the above psychological scourges, and thus should be encouraged when a group makes a joint decision.

In concluding, the Brafman brothers encourage us to escape from these influences by adopting the long term view. Think about financial investments over a longer time horizon and how holding on to a seemingly loss making stock – with sound fundamentals – may be preferred to selling it altogether or increasing one’s stake in it. Embracing a Zen-like approach of mindfulness also helps one to escape from the distortions of value attribution. Similarly, one should recognise that first impressions may be wrong.

Remaining flexible and examining issues from different perspectives is also key. Termed “propositional thinking”, one should keep one’s evaluations tentative rather than certain, and seek complex and contradictory information before arriving at a conclusion. The imposition of a “cooling off period” is a prime example of this, compelling people to wait until the heat of emotional reactions dissipate before deciding on major big ticket purchases.

Overall, a highly recommended read for fans of pop psychology who want to make better decisions in life.

Founder of Cooler Insights, I am a geek marketer with almost 24 years of senior management experience in marketing, public relations and strategic planning. Since becoming an entrepreneur 5 years ago, my team and I have helped 58 companies and over 2,200 trainees in digital marketing, focusing on content, social media and brand storytelling.
The Importance of Building Consensus
Guerrilla Marketing “Bearly” Making It?